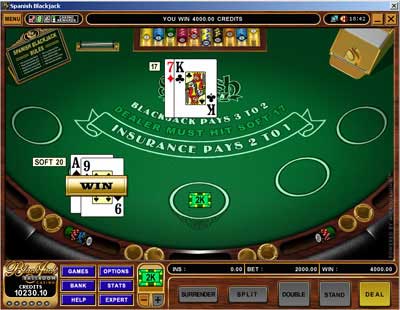 Spanish Blackjack is played with eight unique decks, where each deck consists of 48 playing cards made up of the standard 52 cards, less the four 10 cards.

Spanish Blackjack is an American Hole Card Game. The Dealer checks for a Blackjack when he is dealt a 10 or an Ace.

You can take Insurance if the Dealer's first card is an Ace.

You can Surrender half of your total bet after Doubling Down. This is known as a Double Down Rescue.

You can Late Surrender. This is when the Dealer checks for Blackjack first, and then you Surrender.

If you use the Late Surrender option, you give up half your original bet amount for the privilege of not playing out a hand.